Greetings fellow goalies, it’s Josh Sarlo again, your favorite CT Crease Division III goalie in Massachusetts (sorry Eggy, Thibbs, and Stang). Some of you may remember my article from 2 years back about having fun playing the game. I am now a freshman on the Tufts University hockey team and wanted to take a few minutes to share my experiences through the junior circuit. I’m not going to give you the standard list of places to go, to avoid, advice on camps and tryouts; you see enough of that all over the web, and quite frankly I don’t know enough to preach to the masses. What I can do, however, is talk about how I grew as an individual and the impact junior had on me.

February 2017, I went on a visit to a prominent DIII program. I don’t say this to sound elite (my .878 NAHL save percentage tends to disagree) but to offer insight into the perspective of high-level coaches. This coach in particular was telling me how he preferred to recruit kids out of junior. His direct quote to me was, “I can guarantee you that you are a more mature individual on and off the ice now than you were when you were 18.” It was something I had never really thought about, but he was spot on. What I didn’t realize then either was within my final year of junior I would grow a helluva lot more.

No one wants to be the mentally soft guy. I’ve personally never had anyone tell me, “I take the blame and place it on other people.” I certainly never viewed myself that way. Yet there I was, walking around the Anchorage airport with my fresh ex-teammates, choking back tears after getting told I had to pack my bags. I wish I could say that I was the epitome of accountability and took responsibility, but I deflected the blame. I thought the coaching staff didn’t give me a fair chance, that I should have been the guy, that they were going to pay for this mistake. Just as if some higher being gave me a slap across the face, I spent the rest of the season back home, watching them climb up the standings from 5th out of 6 teams all the way to 2nd in about 5 weeks. The more time I spent on my couch, the more I began to question myself. Did I really give myself the best opportunity? Did I perform to the best of my abilities? Suddenly, the answer became more clear: no. I allowed everyone else to enter my head and lost sight of the one thing I could control: me.

Coaches coach and players play. If players were psychics trying to read coaches’ minds, I was the $5 one you see on the boardwalk of Atlantic City. Coach playing him tonight? Got to figure out why. I’m scratched tonight? Does that mean I’m on the trading block? A word of advice to all goaltenders out there: this is EXHAUSTING. I’m talking post food coma thanksgiving nap exhausting. And guess what? It provides absolutely no benefit. When I was wrong about coach’s reasoning, it changed nothing. When I was right, it still changed nothing. And, as per the majority of the time, when I never found out what he was thinking, it only created a snowball effect.

Fast forward to where I’m at right now. I’m currently typing this en route to our 4th game of the season. We are 0-3 and I’ve yet to find ice time. Pre-juniors, the panic button wouldn’t have been hit: it would’ve been demolished. My parents would have heard it all, my advisor probably would have gotten a phone call himself. Instead, I’ve been able to focus on my development and fine tuning the fundamentals of the game. No worry into coach’s head, no projection of problem outward, just going out and playing hockey. Not only has it made me a better hockey player but a better teammate. I have two incredible goalie partners, both as players and people. We all push each other to get better and I can honestly consider them dear friends to me. As for the hockey, I’ll just keep chugging away and perform when I’m called on to. To that, I say thank you juniors. You took a young boy in and spit me back out a mentally stronger man. I have may become a better hockey player over those few years, but it’s what I learned about myself that I’ll cherish forever. 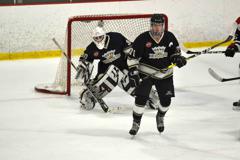